Minimum Wage — When, Why, How Much

AAUW promotes the economic, social, and physical well-being of all persons. Essential to that well-being is an economy that provides equitable employment opportunities, reduction of poverty, and a living wage.

AAUW Pennsylvania advocates for improving the economic self-sufficiency of all women by promoting:

AAUW Pennsylvania Involved in coalition with:

Raise the Wage PA https://raisethewagepa.org
A statewide coalition of community, labor, faith-based, and other organizations fighting for an increase in the PA minimum wage.

We the People https://wethepeoplepa.com
Non-partisan, grassroots-driven campaign whose aim is to have state government work for the citizens.

Keystone Research  https://www.keystoneresearch.org/minimumwage2018
Policy research and ideas for Pennsylvania in the new economy. KRC was created to broaden the discussion on strategies to achieve a more prosperous and equitable Pennsylvania economy.

ar on April 14, 2021, presented by Jacqui Rogers, AAUW Pennsylvania Public Policy Chair, addressed why, if 70% of Pennsylvanians believe in raising the minimum wage, we aren’t being heard and how this affects us all.  Learn the latest economic data, the myths about minimum wage, and current legislation to make the minimum wage a livable wage in Pennsylvania.  Watch the recording here.

The origin of the Minimum Wage is the Fair Labor Standards Act of 1938.  The vision behind minimum wage wasn’t FDR.  It was his Secretary of Labor, Frances Perkins, the first woman to ever hold a U.S. cabinet position.

When signing the Fair Labor Standards Act of 1938, FDR stated:  “No business which depends for existence on paying less than a living wage to its workers has any rights to continue in this country. By living wages, I mean more than a bare subsistence level. I mean the wage of a decent living.”  Too often we hear it said that minimum wage was never meant to be a livable wage, but FDR stated otherwise. This held true for minimum wage until 1968 when it no longer kept up with inflation.

Pennsylvania minimum wage is $7.25/hr, the lowest allowable by federal law, and has been so since 2009.  The current sub-minimum wage for tipped workers is $2.83/hr. The tipped wage is a relic of Reconstruction.  In Pennsylvania, employers of workers that customarily receive tips are only required to pay their tipped workers a base wage of $2.83 per hour, provided their workers’ weekly income from tips plus their base pay at $2.83 brings their hourly rate to $7.25.

Inflation has increased by 13% during this time and productivity has risen steadily while the minimum wage has lost 40% of purchasing power.

70% of PA residents are in favor of raising the minimum wage. Year after year legislation is proposed to do so, but remains in committee in Harrisburg, and is never even debated.  Every state bordering PA has increased its minimum wage, with cost-of-living inc 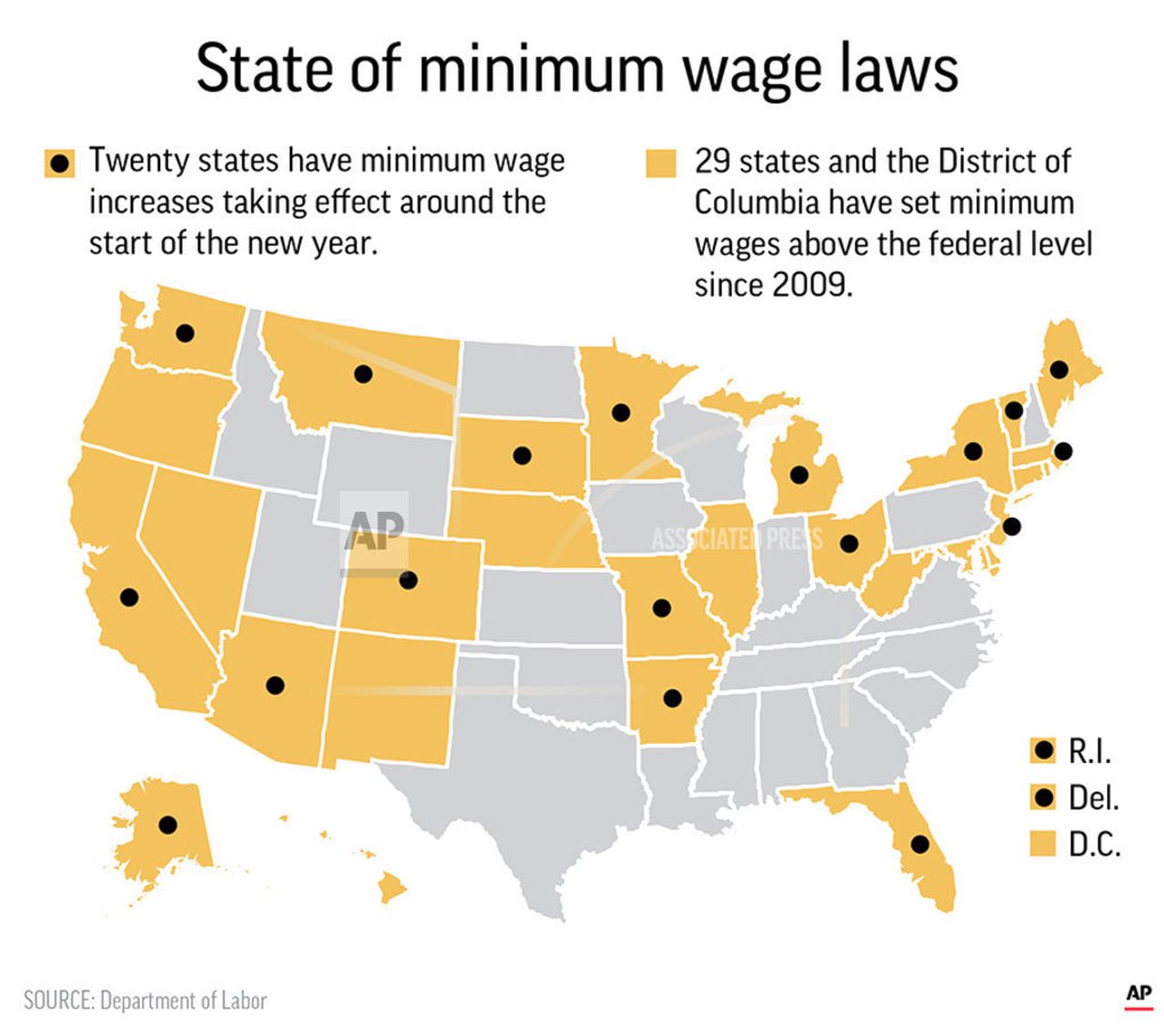 reases built into their formulas.  When state legislatures in Ohio and West Virginia would not increase the minimum wage it was put on the ballot where the people voted to make the increases, just like what happened in Florida last November. Voters in PA do not have this choice as there is no referendum for this issue.  The voters in Ohio and West Virginia used the power of the ballot when their legislators refused to pass an increase – just as Florida residents did last November.

To keep track of the minimum wage in neighboring states, go to:  https://www.paycor.com/resource-center/articles/minimum-wage-by-state/

What is a livable wage in Pennsylvania?

Find the living wage data at: 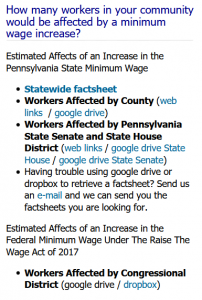 Keystone Research — Has many tools and detailed information about the minimum wage in Pennsylvania on their Minimum Wage Issue page.  Look for the statewide fact sheet and calculation tools that provide worker information by county, state senate district, state house district, and Congressional district.

Who Are Minimum Wage Workers?

The Impact on Women and Minorities

Women and minorities are over-represented in low-wage occupations.

Restaurant work, hospitality, retail, healthcare, home care, and childcare are the predominant fields where low wages exist.  These fields are traditionally considered women’s work. Whenever there is a work area dominated by women and minorities, the pay is disproportionately lower than average.

The sub-minimum tipped wage of $2.83 is the source of unstable incomes and the highest reports of sexual harassment and wage theft. Harassment increased since the pandemic began as female tipped workers are asked to remove their masks so men can “see how pretty you are” before deciding how much or “if” they deserve a tip.

A Tale of Two Waitresses

Time Magazine (August 22, 2019) article Low Wages, Sexual Harassment and Unreliable Tips. This Is Life in America’s Booming Service Industry,  cited a report done by The Fuller Project, a group that investigates the conditions of women around the world. The article focused on two waitresses working at a diner in Philadelphia.

One, a single mother, worked 49 hours this particular week and made $59 in take-home salary and $245 in tips, totaling $304 for the week. If she averaged around this same amount while continuing to work 49 hours each week she would make approximately $14,640 for the year, putting her way below the poverty level where she had no choice but to rely on SNAP and other forms of public assistance. This means that taxpayers subsidize the diner where she works.

AAUW supports moving to $12 now with a goal of $15, ending the tipped minimum, allowing municipalities to adjust minimum wage as they see fit, and increasing protections against wage theft.  We support the following legislation.

SB12: Comprehensive Modernization of the Minimum Wage 2021  bill page
Introduced by Sen. Christine Tartaglione, February 22, 221, Labor & Industry
“An act amending the act of January 17, 1968, known as The Minimum Wage Act of 1968…would:

“The effect of increasing the minimum wage on employment is probably the most studied topic in labor economics, and the consensus of the literature is that moderate increases in the minimum wage has little or no negative effect on employment.”
-From a 2014 letter to Congress from 600 PhD economists, including 8 Nobel Prize Winners.

Productivity Increases When Wages Are Believed to Be Fair

In 1914, Henry Ford doubled the daily wages of his factory workers because he realized his workers weren’t able to buy his cars. He also reasoned that his workers were more productive and reliable if they felt they were paid fairly.

Treasury Secretary, Janet Yellen and her husband Nobel winning economist, George Akerlof, presented a research study in 1990 called the “Fair Wage Hypothesis “ that determined that workers who feel they are paid a fair wage are more productive. Their data posited that more productive, efficient workers translates to less labor costs for employers because they don’t have to hire as many people, pay as much for overtime, or spend money on retraining.

Who Sank the Boat?

Minimum wage is too often blamed for employment loss within a company when it is actually the result of inflation-dependent costs, obsolete production methods, technology advances, lack of sufficient cash flow,  location, and poor management, the rising cost of real estate.

It can even be the result of a fast-growing economy.  For example, Seattle restaurant owner stated “rising rents, insurance, utilities, taxes and employees not being able to live in the area any longer, which led to competition for reliable workers. Final straw could be increased wages but the main cause for the failure of the restaurant.”

All states and cities that have raised their minimum wages have grappled with how to balance the positive results with the negative possibilities.

States of New York, Oregon, California and others have adopted “regional variations” and exemptions for small and vulnerable businesses. Tax credits, time extensions, differing caps, and even grants and low interest loans are some of the ways states have tried to make the changes equitable.

The jobs most at risk are known as “tradables, defined as those that can be done anywhere. Businesses that communities rely on are less likely to encounter downturns in business, even for short adjustment periods.  For example, Kohl vs. Macy’s: Both having to close stores due to loss of sales to online sellers. Kohl’s formed a relationship with Amazon to be one of their return centers, bringing more people into their stores with the expectation that they will purchase Kohl’s merchandise while they are there.

Businesses have always had to adjust as the economy and lifestyles change. How this will play out following the pandemic remains to be seen.

The Congressional Budget Office (CBO), forecasts that raising the minimum wage over several years to $15/hr would deliver $333 billion more in wages to low-wage workers making wages slightly higher than the minimum already. This is because the minimum is seen as the “floor rate” that will cause an upward increase.

When the minimum wage rises it has a scaffolding effect that lifts the wages of workers working at other pay scales.

Lawmakers are divided about whether one-size-fits-all or setting regional rates are the best way to go. Regional rates are getting some added attention due to the uncertainties of the post-pandemic economy.

Some services that are funded by municipal, state or federal agencies are vulnerable to budget cuts, even as they were struggling prior to COVID, and are constrained in finding ways to deal with increased costs to meet safety regulations, prices of supplies, and employee salaries and benefits.

Research from Brookings Institute published April 2021 stated:  “Our caregiving infrastructure is so broken that even while families are unable to pay for care, the low wages paid to caregivers leave them unable to make ends meet.”

Federal level proposals: American Jobs Plan – Reimagining what infrastructure means includes funding the country’s caregiving infrastructure as it looks at workers as an integral part of the rebuilding of the economy.

COVID brought to light our reliance and indebtedness to so many frontline workers earning low wages who risk their lives every day for us. People can have short memories and long rationalizations when they think they may have to contribute more in the form of increased prices to insure the same workers we relied upon these workers …to whom we truly owe our lives.

There is general agreement that an increase in the minimum wage to a livable wage is needed. The question becomes by how much and what constitutes a fair gradual increase? Should it be one-size-fits-all or regional? How will small businesses and services be protected? How can temporary forms of relief aid in the transition?

In The Fire Next Time, James Baldwin puts the word “wait” in quotation marks so that it stands out on the page. He describes the anger and utter frustration this word produces in people who are continually asked to “wait” because other issues and people are deemed more important. Low-wage earners work in jobs that we rely on every day, Far too many of these jobs involve workers putting themselves in danger, being subjected to sexual, gender, and racial discrimination, and have irregular schedules.

People who work 40 – 60 hours a week and still can’t make enough to pay for basic needs know the anger and painful reality of being asked to wait for some late date to be treated fairly and with the respect they deserve.

Low-wage workers have waited long enough with making the same inadequate wage since 2009. Since 1968 minimum wage has decreased its purchasing power by 40% while inflation has increased by 13%.

It is estimated that if the minimum wage had risen according to inflation it would be $12/hr; and if it kept pace with productivity gains, it would be around $24/hr or $48,000 per year. An abundance of research indicates that the benefits of a gradual increase to $15/hr far outweigh the possible negative impact of continually moving livable wage farther into the future while low-wage workers “wait”.