The committee would like to thank the candidates for agreeing to run and to serve if elected. The chair would also like to thank the state board for ongoing support and the members of the Nominating and Elections Committee for their perseverance and support: Eastern District: Kathy Quinn, Makefield Area Branch; Central District: Cathy Wieland, Lebanon Valley Branch; Western District: Linda Tozier, North Hills Pittsburgh Branch; and Alternates: Pat Markowski, Carlisle Branch (Central District), and Loretta Seigley, Erie Branch (Western District).

Nominees for State Board Positions

The AAUW PA Nominating and Elections committee is pleased to announce a full slate of nominees for the upcoming elections. Astute readers will notice that Cynthia Hall has agreed to run for president rather than for, as previously announced, program vice president.

Read below for details about the candidates for these offices:

Cindy is currently the Co-Vice President for Marketing and Communication for her branch, having previously served on the Education subcommittee, as Co-Vice President for Membership (2016-17), as co-president (2017-21), and as immediate past president the following year. In 2017, she was awarded the Member Making a Difference Award and, in 2021, the Outstanding Woman Award, both from State College Branch.

Cindy has attended a state summer retreat, Central District meetings, and two state conventions. She was an alternate for the National Nominating Committee in 2020-21 and is serving on that committee currently.

Cindy retired from her job as Associate Vice President for Strategic Communications and Chief Marketing Officer from Penn State University in 2015. She also taught Public Relations Media and Methods and Public Relations Campaigns as a part-time instructor in the College of Communications at Penn State. She has significant experience in branding, marketing research, communications, and management. In addition, she managed major political candidate visits for Penn State (Obama, Hillary Clinton).

Cindy holds a Ph.D. from Penn State and graduated from the in-residence Management Development Program (MDP), Harvard University Graduate School of Education. She has received more than 20 awards from CASE (Council for Advancement and Support of Education), and was selected as one of 25 women nationally to participate in the CASE Forum for Women Institutional Advancement Officers. Cindy participated in a roundtable for Trustee Magazine on Branding, Chicago as well as for PR Week, New York. She has been conference chair for several CASE conferences and a frequent speaker. In addition, Pennsylvania Business Central named Cindy as one of the Top 20 Nonprofit Female Leaders in 2019.

Cindy presented her research titled Gendered Roles/Gendered Relations: A case study of the status and role of women in a research university at AERA (American Educational Research Association), San Francisco.

When asked what she sees as the primary focus of AAUW-PA and how she would work toward that goal if elected, Cindy answered:

Helping to achieve a clear and consistent vision for AAUW by coordinating and communicating effectively with both the state’s branches and national is a priority for AAUW-PA. For the organization to remain strong in a highly turbulent environment, AAUW must be differentiated from the increasing numbers of organizations beginning to share the same space.

The AAUW-PA President, working closely with state and branch leaders, must ensure AAUW’s mission is both understood as well as acknowledged and respected across the state. We must continue to advocate for increased understanding as to how our mission is vital to the success and advancement of the Commonwealth.

The past few years presented major membership and financial challenges for many branches. We need to rebuild any ground that has been lost due to diminished in-person interactions and activities. We should remind ourselves of the critical role we play in achieving our mission-specific goals. The President and all leaders must reinvigorate members to address these challenges and invite others to join us in our mission.

Lori is currently Public Policy Chair and University Liaison for her branch, having previously served as Program Vice President (2017-19). In 2017, she was awarded the Member Making a Difference Award. As Program VP, she organized a panel discussion on women’s health needs in rural areas, chaired an economic forum that aimed to hear from women civic leaders and candidates running for office about how the County might improve the economic status of women and their families, and participated in Start Smart workshops. More recently, she assisted with her branch’s planning of the 100th Anniversary of Women’s Suffrage in Indiana County, and teamed up with the Alice Paul House for Sexual Assault Awareness Month.

A strong advocate of interdisciplinary education, Lori serves as the Associate Dean of the School of STEAM (Science, Technology, Arts and Mathematics) at Saint Francis University (Loretto PA). She has taught the history of medicine and science, and women and gender history for thirteen years. She has also served as National Secretary of the Association of General and Liberal Studies (AGLS) and as Branch Secretary of the NAACP in Indiana County, PA.

Lori has advocated for women in STEM fields, mentoring girls in her community through her volunteer work with the local NAACP. In her teaching, she emphasizes the unique lives and experiences of women in the past, seeking to instill life-long learning in her undergraduate students. Lori has published in the field of women and gender history, having worked with pioneers such as Natalie Zemon Davis, a recipient of the National Humanities Medal.

When asked what she sees as the primary focus of AAUW-PA and how she would work toward that goal if elected, Lori answered:

The primary focus of AAUW-PA is to be a strong advocate for effective public policy that supports women and families throughout the commonwealth. In my view, one of the challenges is to find ways to motivate the next generation to get involved. This requires reaching out to the community at large, meeting people where they are, including those whose voices are often not heard.

I will use my knowledge and experience as a teacher, as well as my involvement in the leadership of organizations that work to effect good, strong public policy, in order to develop a robust program that will motivate an audience who is moved to get involved in the mission of AAUW, ultimately to build coalitions to help address the gaps in public policy. 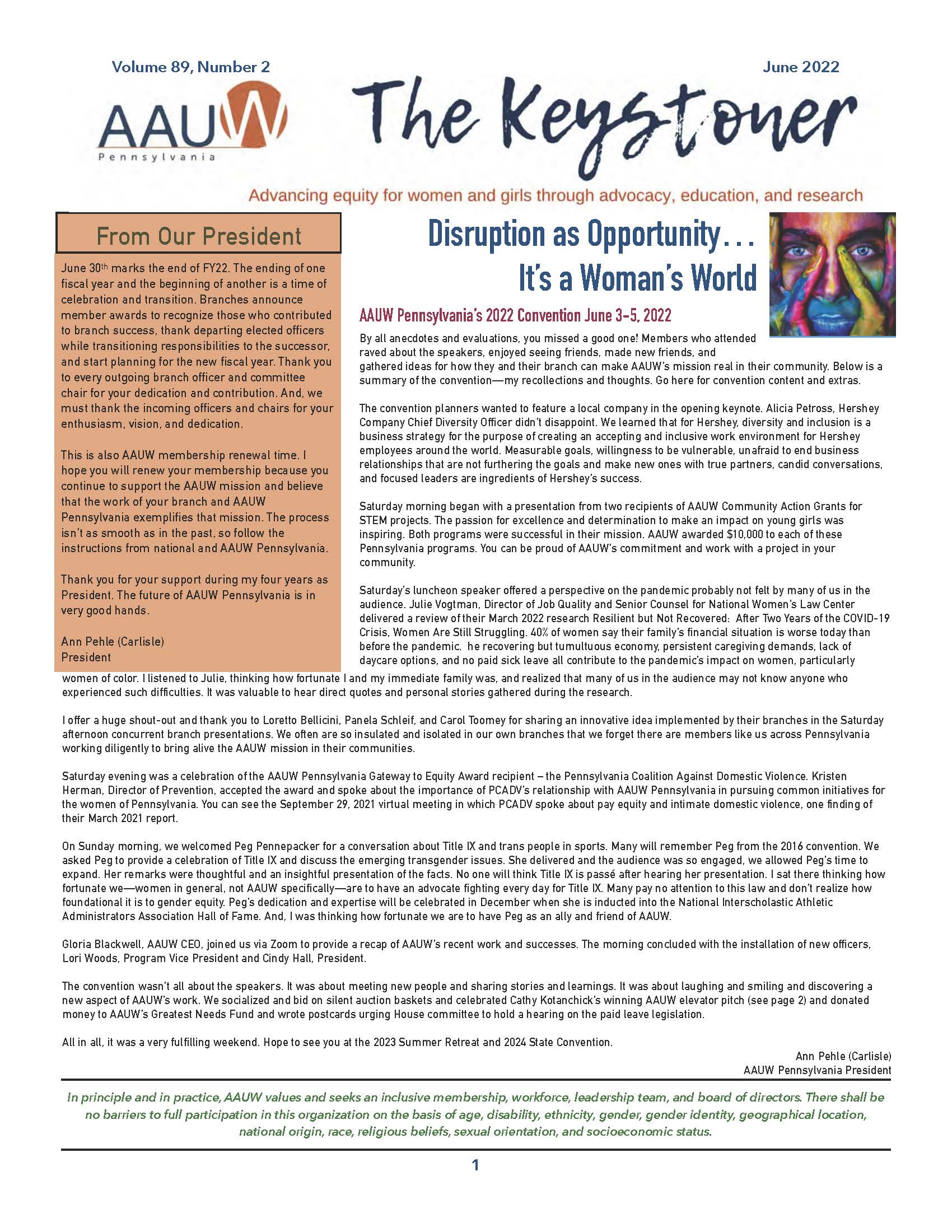