Issue Description
Gender Pay Gap, Pay Equity, Equal Pay — different labels for the same issue — and always a primary issue for AAUW.  As early as 1922, AAUW’s legislative program called for a reclassification of the U.S. Civil Service and repeal of salary restrictions in the Women’s Bureau.  In 1955, AAUW supported a bill introduced by Reps. Edith Green (D-OR) and Edith Rogers (R-MA) requiring “equal pay for work of comparable value requiring comparable skills.” Congress finally enacted the Equal Pay Act, a version of the 1955 bill, in 1963.

In 2017, on average, women who work full time take home about 80 cents for every dollar a full-time male worker earns.  In Pennsylvania, the gap is also 80 cents for every dollar or 24th out of all states and the District of Columbia.  Over a lifetime (47 years), the total estimated loss of earnings of women compared with men are $700,000 for a high school graduate, $1.2 million for a college graduate, and $2 million for a professional school graduate.

Women of color and Moms are usually more affected by the pay gap.  Understand why in The Simple Truth about the Gender Pay Gap.

AAUW is a leader in the fight to end wage discrimination and open doors for women in the workplace at both the federal and state levels.  These AAUW and other resources provide the foundation for your understanding of the issue.

There are two other terrific resources for background and data analysis.  National Women’s Law Center provides comprehensive reports, fact sheets, maps, and much more.  Institute for Women’s Policy Research published The Economic Impact of Equal Pay by State.  Hint,  closing the gender pay gap would lower the poverty rate among women in every state.  Pennsylvania’s would drop from 7.3% to 3.6%.  Pennsylvania’s poverty rate for single, working mothers would drop from 27.8% to 11.1%.

Federal Legislation
The Fair Labor Standards Act of 1938 (FLSA) establishes minimum wage, overtime pay, recordkeeping, and child labor standards affecting full-time and part-time workers.  FLSA applies to workers in Federal, State, and local governments and in companies whose annual sales total $500,000 or more or who are engaged in interstate commerce.  You might think that this would restrict the FLSA to covering only employees in large companies, but, in reality, the law covers nearly all workplaces because the courts have interpreted the term interstate commerce very broadly.  Some employees are not covered by FLSA minimum wage and overtime provisions.  They are (you will see why this is important in the Pennsylvania Legislation section):  Babysitters on a casual basis, Companions for the elderly, Farm workers employed on small farms, Employees employed by certain seasonal and recreational establishments, Federal criminal investigators, Fishing, Newspaper delivery, Newspaper employees of limited circulation newspapers, Seamen on other than American vessels, and Switchboard operators.

The Equal Pay Act of 1963 amends FLSA to prohibit pay discrimination on the basis of sex. It requires that employers pay similarly situated employees the same wage, regardless of sex.  Despite the passage of the EPA more than 50 years ago, women still do not earn wages equal to those of their male peers.

The Paycheck Fairness Act (H.R. 7)  was reintroduced on January 28, 2019 by Rep. Rosa DeLauro (D-Conn.) and Sen. Patty Murray (D-Wash.) and provides a much-needed, first-ever update to the Equal Pay Act.  It takes meaningful steps to create incentives for employers to follow the law, bars retaliation against workers who voluntarily discuss or disclose their wages, and prohibits employers from relying on salary history in determining future pay so that pay discrimination doesn’t follow women from job to job.  On March 27, 2019, the House of Representatives voted bipartisan passage (242–187).  One of the seven Republicans voting YEA was Congressmen Brian Fitzpatrick of Bucks County, thanks to the effective use of grassroots advocacy techniques by Barbara Price, AAUW Pennsylvania Public Policy Co-Chair.

Pennsylvania Legislation
Measured against the AAUW criteria for good equal pay legislation, Pennsylvania’s law is weak.  The Equal Pay Law was passed in Pennsylvania in 1959 and contains these criteria.

A key AAUW criterion is:  Public, private, and small business employers are all covered, no exceptions for those covered by the federal Fair Labor Standards Act (FLSA).  A 1967 amendment to Pennsylvania’s Equal Pay Law excludes anyone subject to the federal Fair Labor Standards Act.  That means that ONLY persons employed in the positions in red above are covered by Pennsylvania’s Equal Pay Law.  Did/does the Pennsylvania law cover you?  Does it cover your friends? Family?  Neighbors?  What good is a law that doesn’t cover the majority of employees in Pennsylvania?  When you understand this nuance of Pennsylvania current law and introduced legislation, you will be smarter than most legislators and their staff.

How would eliminating the annual wage gap effect PA families?

LEGISLATION and AAUW-PA position
Our support or opposition to legislation is vetted through AAUW and endorsed by Pennsylvania Campaign for Women’s Health.  There are several pieces of legislation.  This 2021 Comparison of Equal Pay Bills provides a quick comparison.  If the following bills begin to move through the legislative process, we will take a position.

We celebrated the signing of Governor Wolf’s executive order on June 6, 2018.  Scroll down to read about the signing event.

MATERIALS FOR A LEGISLATIVE PACKET
First rule of advocacy–never go empty handed.  Here are suggested contents of a packet to discuss equal pay.

TAKE ACTION as an Individual

TAKE ACTION as a Branch 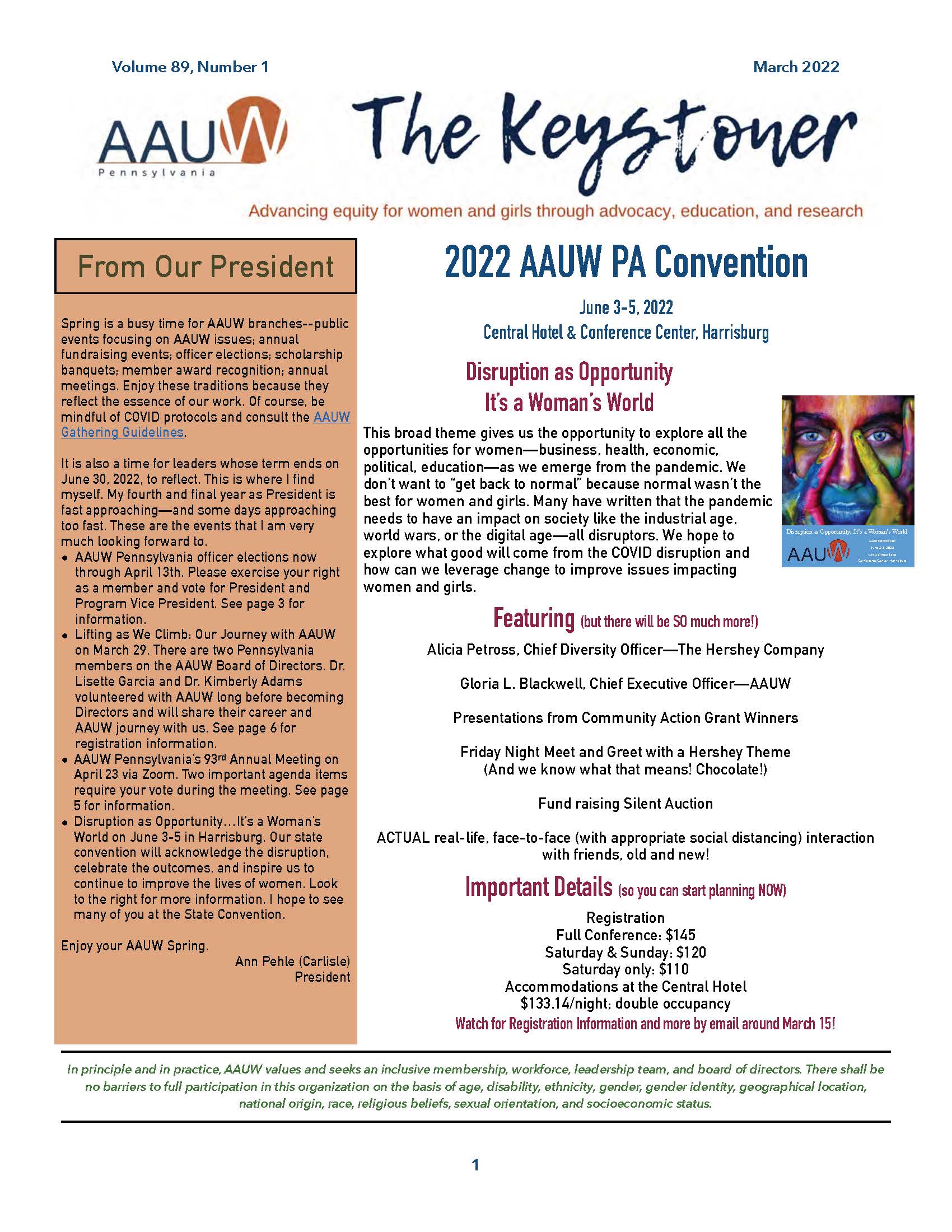