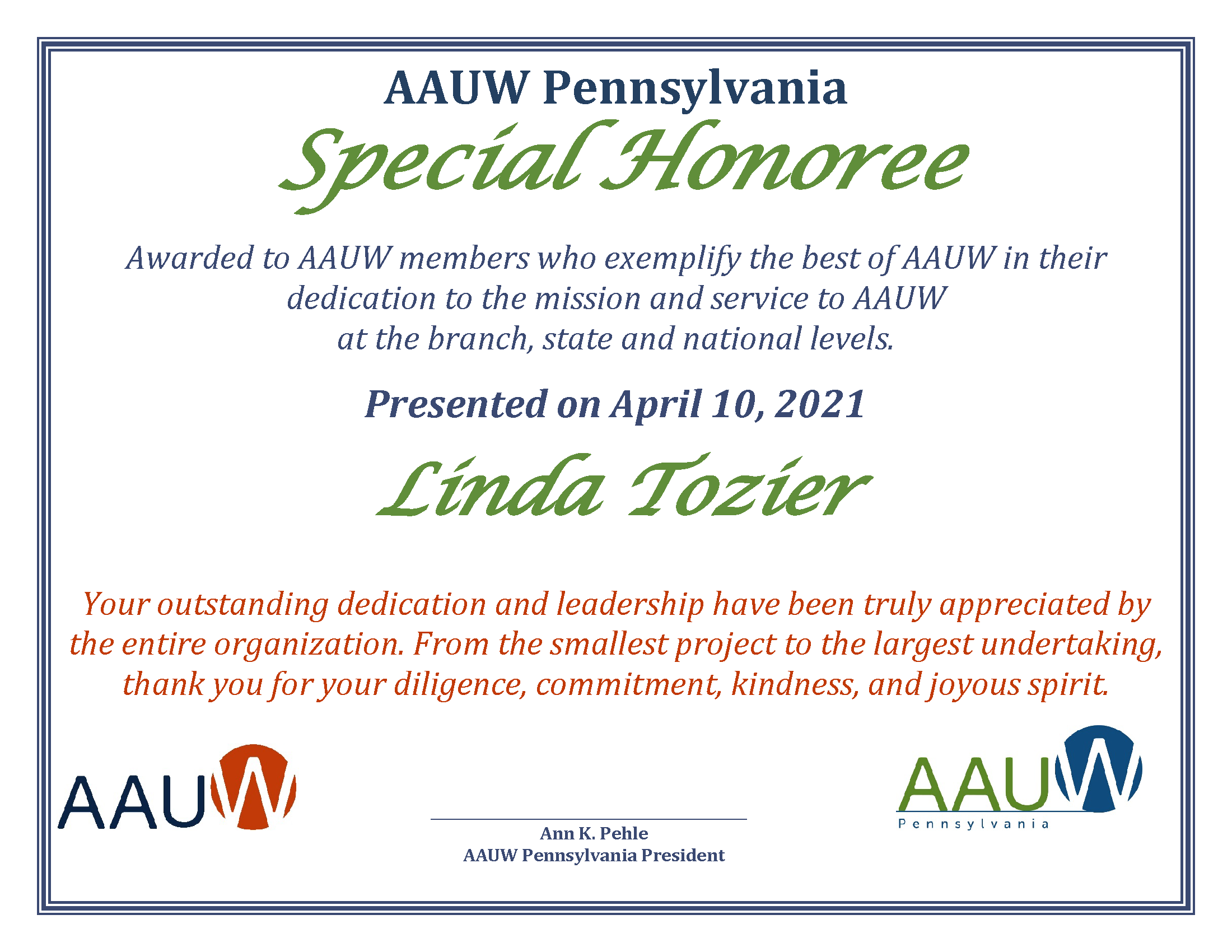 A 1965 graduate of Bucknell University, Linda Tozier followed her mother into AAUW, earning awards and positions of responsibility at all levels of the organization. Linda has said that AAUW has been THE significant factor in creating who she is. Her mother was president of AAUW Stroudsburg, now AAUW Pocono Area, when she was born. Because this was during World War II and because her mother ran the family business while her father was in the Army, her mother stepped down from being branch president before the end of her two-year term. Linda has dedicated herself to honor the memory of her mother through her years of service to AAUW in two branches, at the state level, and on AAUW committees and the national board.

AAUW Board of Directors Candidate.

A life member, Linda served as her branch president for six years and in four other branch positions: Program Vice President, Membership Vice President, AAUW Funds chair, and Tech Savvy Volunteer. She won both the 1984 Outstanding Woman Award and the 2015 Member Making a Difference Award from her branch. Since 1990 when she was appointed Cultural chair, Linda has served at the state level in many positions, most importantly as the 2002-04 president and for many years as membership vice president. During her presidency, she was challenged to raise $75,000 to support a research study. Of course, the 75th Anniversary Diamond Donor Campaign succeeded. AAUW’s Educational Foundation and Legal Advocacy Fund jointly produced Tenure Denied, and AAUW-PA’s financial support was recognized therein. Linda eventually earned the well-deserved post of Middle Atlantic Regional Director and was elected to the AAUW National Board as a Director-at-Large. She has also served on the national Membership Committee and the Committee Appointment Task Force and is currently on the national Advancement Committee.

Linda cares deeply about AAUW at all levels, and her commitment to the organization and the mission has been unwavering. Notably, her passion for membership has encouraged individuals and branches to stay involved and engaged. In working tirelessly for AAUW, she remembers the business and the people and contributes her all. She provides vision and AAUW history as well as a willingness to work on projects, committees, branch concerns, and other matters large and small. For example, in 1992, Linda was one of a handful of women serving as the first district coordinators for AAUW-PA. Because she is creative, careful, and caring, others in the group leaned on Linda’s AAUW experience and expertise when creating the expectations of the role and in working with branches. Members across the state and country still lean on Linda for the same reasons. Even those who do not know her have, nonetheless, benefitted from her contributions over several decades, as their branch officers have no doubt received information, forms, and moral support from her.

A joy to work with, Linda always brings a spirit of play, making AAUW endeavors both more successful and more enjoyable. She always says that she doesn’t do anything if it isn’t fun, and she has made AAUW fun for so many while enjoying herself at the same time. She has lightened

our work by playing Marion Talbot, co-founder of AAUW in 1881, in The Talbot Story at the 2016 AAUW-PA convention. Even better, in 1995, the state board asked Linda to dress up like Mickey Mouse at the state convention to encourage members to attend the national convention at Disney World. Linda’s son helped her write a rap song and provided a tape of background music. In costume, she jumped out right before the awards dinner chanting, “My name is Mickey, and I’m here today to invite you all down the Florida way.”

It is with great respect and gratitude that AAUW-PA honored Linda Tozier with a 2020 donation of $1850 to the Greatest Needs Fund and now honors her as an AAUW-PA Special Honoree for exemplifying the best of AAUW in her dedication to the mission and service to AAUW at the branch, state, and national levels. Congratulations, Linda, and thank you from the bottom of our hearts. 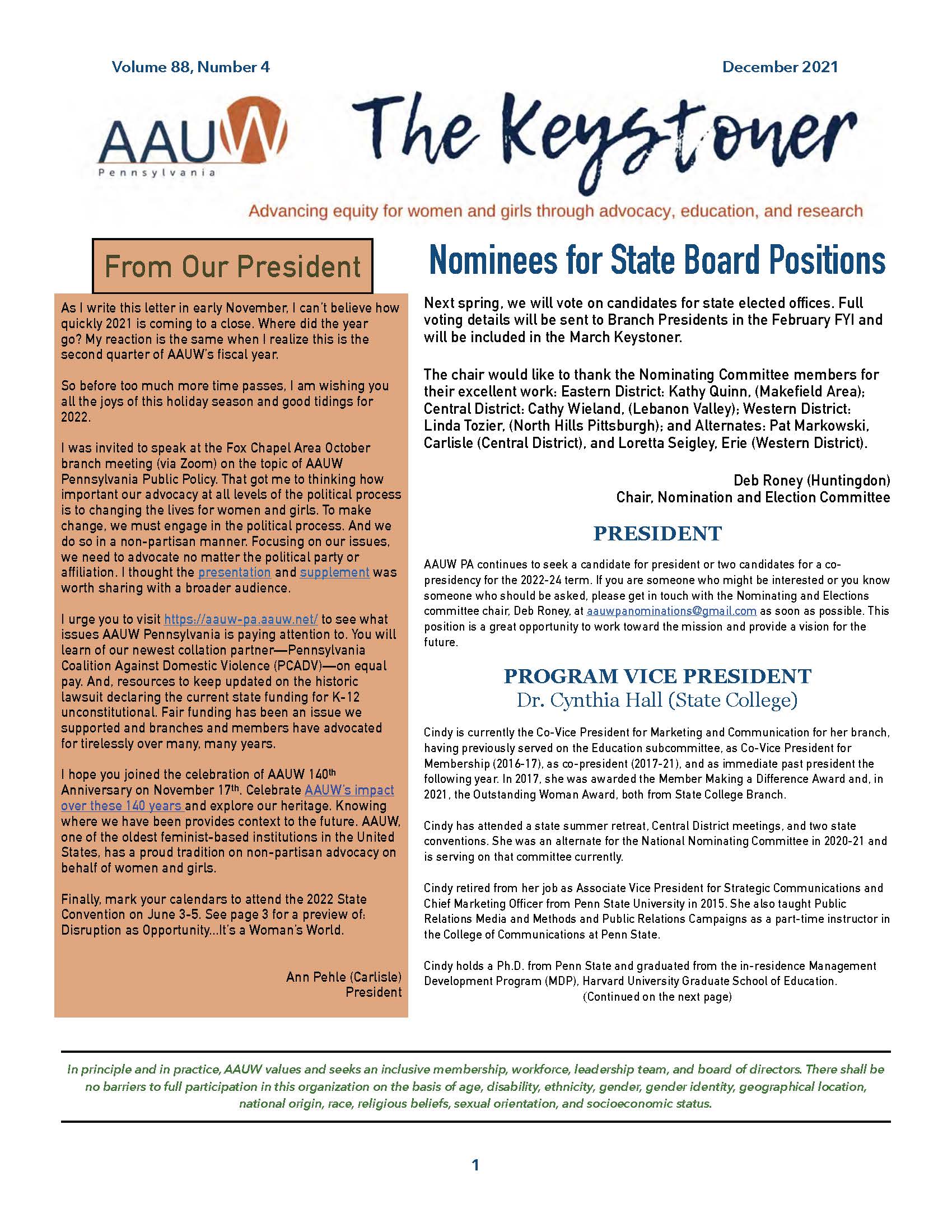